(The latest in a series of posts on Gadfly History)

Kim Carrrell-Smith is a 31-year resident of Bethlehem’s historic Southside, where she taught public history at Lehigh University for almost two decades. She is also an aspiring gadfly, buzzing in on issues of historic preservation, public education, city government, and other social justice issues. She tips her wings to the master gadflies who have served our community for so long!

Stephen Antalics is 90. I find that hard to believe, but it makes me happy to have an occasion to wish him well and say thanks. He has been a fixture at City Council Meetings: the battling, dodging, darting, eloquent King of Gadflies who has brought so much to the attention of our elected and appointed city officials. He’s fought for justice, for enforcement of laws, for equity and respect for our citizens (even though the majority of our citizenry is unaware of his advocacy)! He is not paid to do this, nor is he seeking fame or glory. He simply wants what is best, and fair, and uplifting for our community. But I’d be remiss if I didn’t tell you why I really love Stephen.

As a fellow Southsider who holds an abiding affection for this eclectic, diverse, vibrant part of town, I love Stephen because as a lifetime resident here he gets this place in a 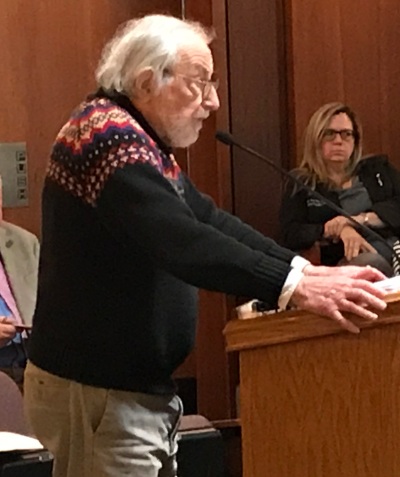 way that no one else under 90 really can. He’s part of this place, and he’s seen the good, the bad, the ups and downs, the old folks departing, and the younger folks coming in. He’s seen the range of ethnicities change and morph over time as our population has ebbed and flowed. And he loves the history of this place that is represented in its people, its buildings –from churches to businesses and homes, to industrial structures, to streetscapes—he knows that history is important. He knows that it is a selling point for this side of the river, just as it’s a selling point for that other side. And he’s not afraid to show up and do his part to help folks understand that.

Gadflies, as we know, are underappreciated and underestimated. They show up when you want to end a meeting, or when you want to rush something through; they don’t seem to fit our efficient, speedy “lifestyle” these days. The Usual Suspects are met with rolling eyes, and sometimes more overt derision and disrespect. But they persist. And Stephen is the guy who looks past all of that, and does what is necessary to raise consciousness, and consciences. He puts himself on the line. He brings attention to small things as well as big issues. He persists. And he makes us better people here in Bethlehem.

Stephen is 90? Hard to believe. But I’m wishing him light, and happiness, and well-being on this big birthday, with all of the thanks I can send him. The King of the Gadflies: long may he reign!