I’m not a racist, Ms. Steele, not even a little, why I pioneered teaching “Voices from the Margin” in 1990, a course introducing multiculturalism — the literatures of African Americans, Latinos, Chicanos, Mexican Americans, Native Americans, Lesbians, Gays  — into the Lehigh University English Department curriculum in 1990.

I even received a University award in 1993 for these and other activities related to multiculturalism. You don’t think they’d have given me that award if there was even a whiff of racism, do you? 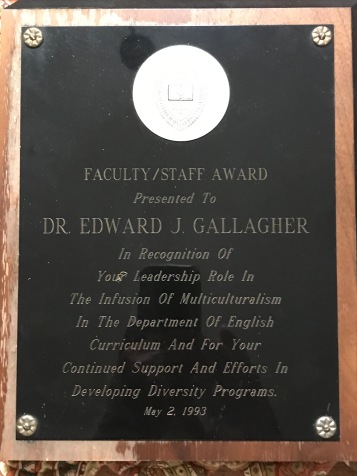 Under the guidance of lily-white but color-blind nuns, I deposited endless pennies in small, fragile cardboard boxes decorated with crosses for the good of pagan babies in Africa throughout my elementary school years.

I had a black friend on the Highland Avenue School playground.

As a second baseman, I wore number 42 on the school baseball team.

I cry when I hear Louis Armstrong’s “What did I do to be so black and blue?”

I feel a genetic connection with Leadbelly and Big Bill Broonzy.

I have incorporated African American and Hispanic and Portuguese “Bethlehem Moments,” and LGBTQ is coming.

I come from good stock. My father worked on a melting pot assembly line, making low-level foreman just before his death. At his funeral an African American man tearfully pumped my hand with both of his, saying he was the fairest white man he ever worked for.

I have passed the good seed down.

In middle school son #2 had a new jacket stolen from a locker room. His black friends vouched for him on the grapevine as a good guy and the jacket was returned.

Son #2 had a black roommate in college. By choice. Proudly.

Son #4 has a wonderful African American friend Mrs. Gadfly calls her “long lost son” and whom he calls “mom.”

I’ve lived next door — literally wall-to-wall — in perfect harmony with a black family for 50 years. I now cut grass for the widow, shovel her snow, empty her trash. Our family were virtually the only white people at the Mister’s funeral.

So don’t dare tar me with the racism brush, Ms. Alison Steele from Bethlehem, no ma’am, not even a little.