(Latest in a series of posts on Bethlehem Manor and Neighborhoods)

In addition to Brian Nicas, three other residents testified against the Bethlehem Manor proposal.

They represent an interesting range of approaches.

Elaine Torres — whose house is in the Manor’s “backyard” — carrying the dog of her deceased mother — not in the best of health — brought an emotional storm to the proceedings, chastising the Bethlehem Manor team for unresolved operational issues — like mosquitoes from the “rain gardens” that made it hard to work in her yard — literally, vigorously calling out the architect. She had to be soft-gaveled back to decorum twice or thrice by the chair. Gadfly would not recommend a heavy diet of such resident testimony at proceedings such as this, but, on the other hand, he must admit that this spectacle of raw anger and anxiety — so different from the conduct of the other proposal critics — starkly reminded him that these proceedings were not just a paper exercise performed by slickly dressed lawyers.

Bill Scheirer — better known as Gadfly #2 — spoke with his

signature compelling softness, and spoke directly to the Board, making a meaningful distinction aimed at the wonks on the Board. Adaptive reuse of a surplus school is one thing, said this cool customer, but the Bethlehem Manor proposal is entirely different. It is expansion not adaptive re-use. Leave it to Gadfly-deuce to make sure the argument was framed properly.

It was Anne Lendzinski whom Gadfly thought asked the two most pertinent and incisive questions of the night: 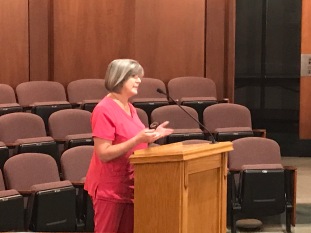 In her first question, Anne struck deep at the heart of a damning inconsistency. How could an accomplished and experienced personal care home Administrator not have been thinking about the move to private rooms from the get-go? The question undercut the narrative — the origin myth, if you will — that Bethlehem Manor was positing.

To her credit, the Administrator had a good come-back — she was working, she said, from the pervasive model in this Rosemont neighborhood exemplified, for instance in Holy Family Manor — but for Gadfly the question itself was telling in his own decision-making.

The second question — tapping the network of troublesome details of the Bethlehem Manor operation — just seemed to call attention to the fact that Bethlehem Manor was not the squeaky clean good neighbor it proclaimed itself to be and thus had not earned this vote of confidence from the neighborhood.

Gadfly looks back on the short Anne-Administrator dialogue here as a turning point for him.